Recently had a flash back to a moment around 2002 where I found a page on the campus hosted website of one of my TAs for a computer science course. The page was just a big slam list a bands that suck. Poking around on the wayback machine I managed to dig it up. Enjoy the suffocating amount of angst. 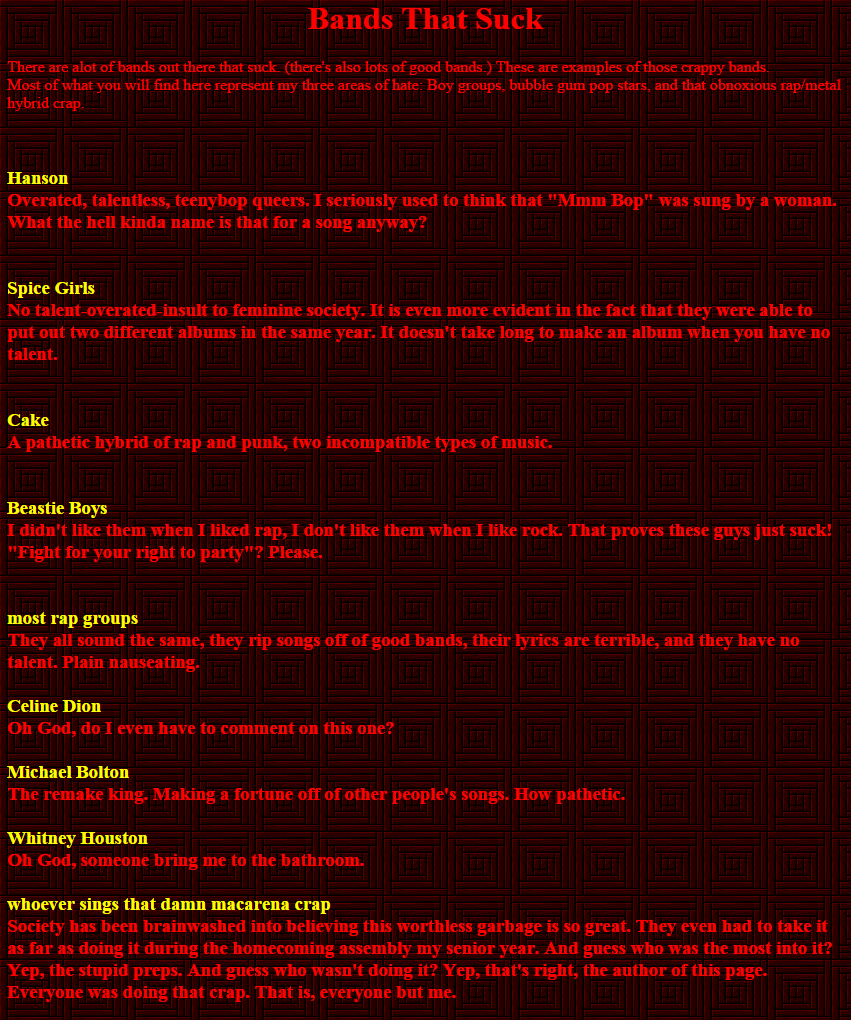 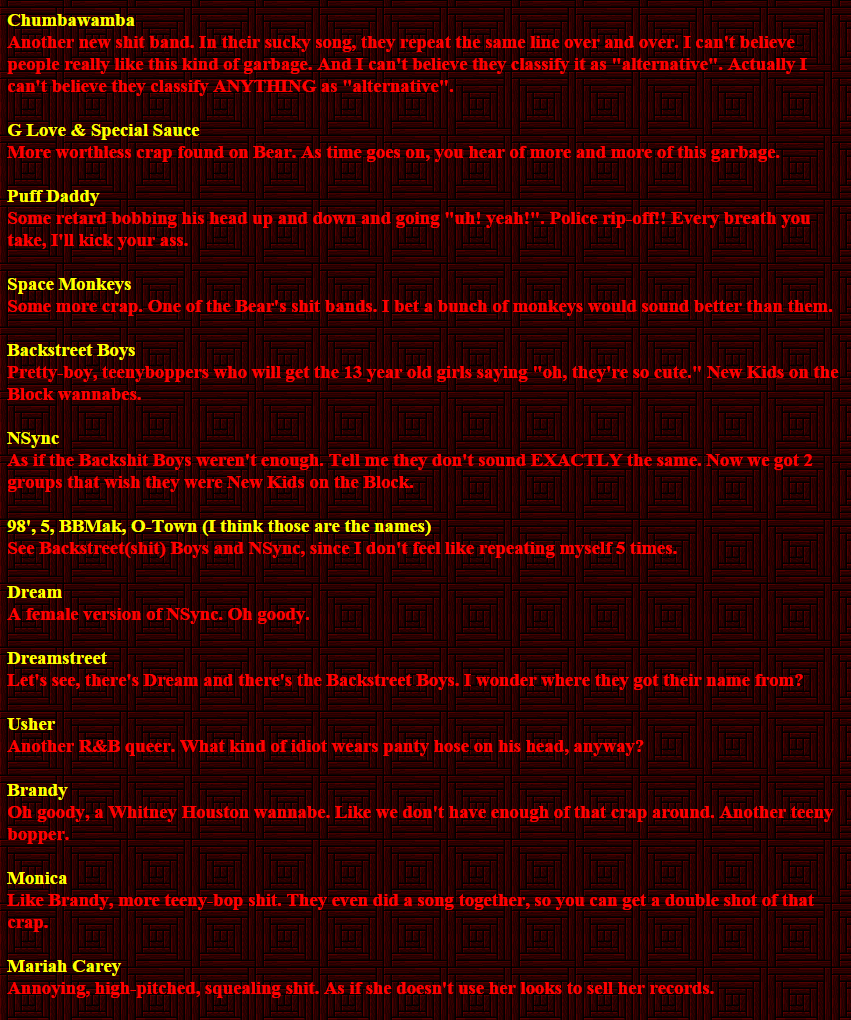 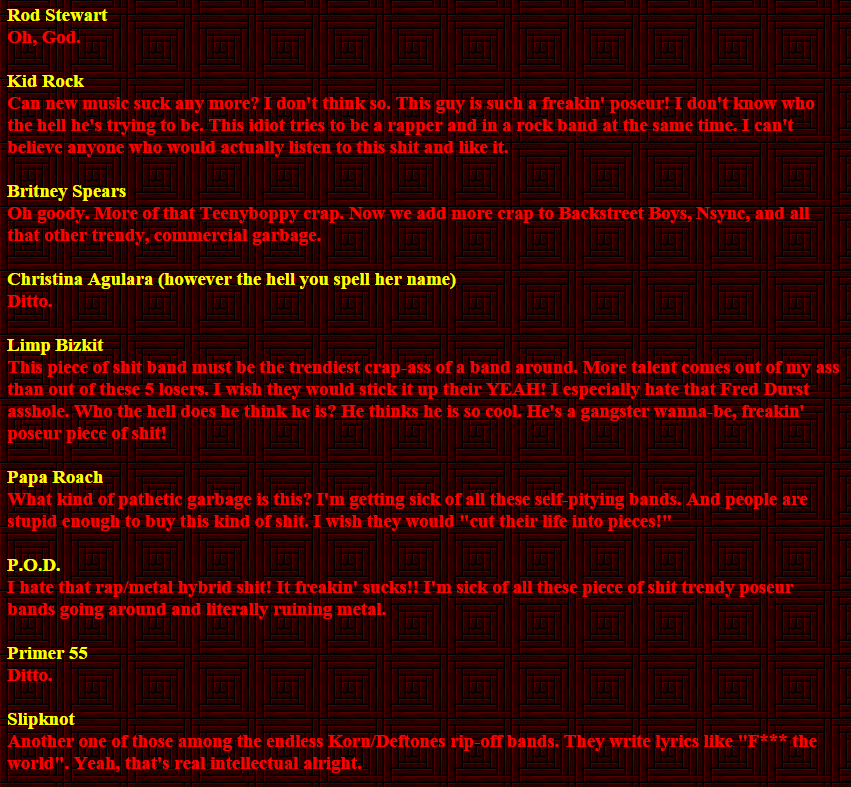 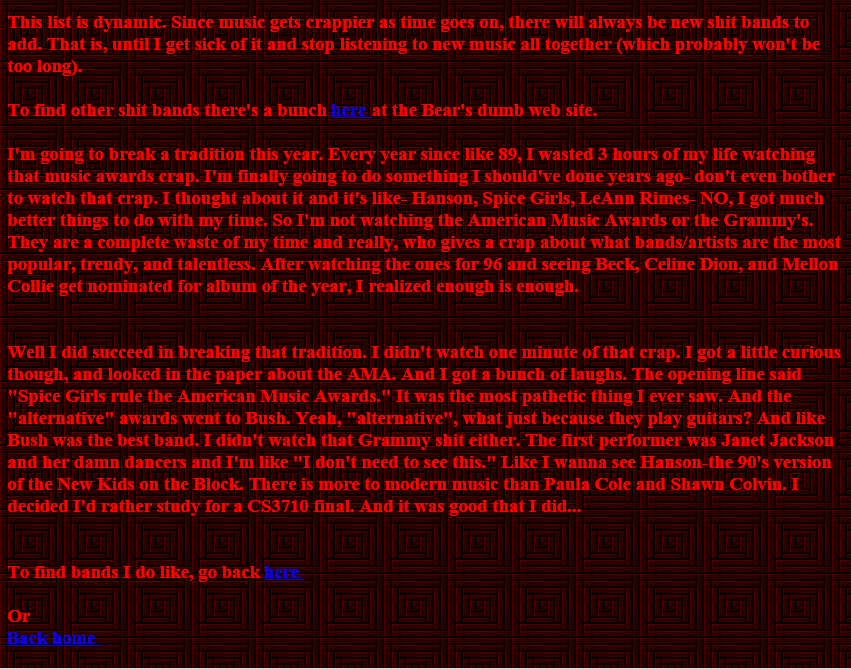 There are alot of bands out there that suck. (there’s also lots of good bands.) These are examples of those crappy bands.

Most of what you will find here represent my three areas of hate: Boy groups, bubble gum pop stars, and that obnoxious rap/metal hybrid crap.

Hanson
Overated, talentless, teenybop queers. I seriously used to think that “Mmm Bop” was sung by a woman. What the hell kinda name is that for a song anyway?

Spice Girls
No talent-overated-insult to feminine society. It is even more evident in the fact that they were able to put out two different albums in the same year. It doesn’t take long to make an album when you have no talent.

Cake
A pathetic hybrid of rap and punk, two incompatible types of music.

most rap groups
They all sound the same, they rip songs off of good bands, their lyrics are terrible, and they have no talent. Plain nauseating.

Celine Dion
Oh God, do I even have to comment on this one?

Michael Bolton
The remake king. Making a fortune off of other people’s songs. How pathetic.

Whitney Houston
Oh God, someone bring me to the bathroom.

whoever sings that damn macarena crap
Society has been brainwashed into believing this worthless garbage is so great. They even had to take it as far as doing it during the homecoming assembly my senior year. And guess who was the most into it? Yep, the stupid preps. And guess who wasn’t doing it? Yep, that’s right, the author of this page. Everyone was doing that crap. That is, everyone but me.

G Love & Special Sauce
More worthless crap found on Bear. As time goes on, you hear of more and more of this garbage.

Puff Daddy
Some retard bobbing his head up and down and going “uh! yeah!”. Police rip-off!! Every breath you take, I’ll kick your ass.

Space Monkeys
Some more crap. One of the Bear’s shit bands. I bet a bunch of monkeys would sound better than them.

Backstreet Boys
Pretty-boy, teenyboppers who will get the 13 year old girls saying “oh, they’re so cute.” New Kids on the Block wannabes.

NSync
As if the Backshit Boys weren’t enough. Tell me they don’t sound EXACTLY the same. Now we got 2 groups that wish they were New Kids on the Block.

98′, 5, BBMak, O-Town (I think those are the names)
See Backstreet(shit) Boys and NSync, since I don’t feel like repeating myself 5 times.

Dreamstreet
Let’s see, there’s Dream and there’s the Backstreet Boys. I wonder where they got their name from?

Usher
Another R&B queer. What kind of idiot wears panty hose on his head, anyway?

Brandy
Oh goody, a Whitney Houston wannabe. Like we don’t have enough of that crap around. Another teeny bopper.

Monica
Like Brandy, more teeny-bop shit. They even did a song together, so you can get a double shot of that crap.

Mariah Carey
Annoying, high-pitched, squealing shit. As if she doesn’t use her looks to sell her records.

Kid Rock
Can new music suck any more? I don’t think so. This guy is such a freakin’ poseur! I don’t know who the hell he’s trying to be. This idiot tries to be a rapper and in a rock band at the same time. I can’t believe anyone who would actually listen to this shit and like it.

Britney Spears
Oh goody. More of that Teenyboppy crap. Now we add more crap to Backstreet Boys, Nsync, and all that other trendy, commercial garbage.

Christina Agulara (however the hell you spell her name)
Ditto.

Limp Bizkit
This piece of shit band must be the trendiest crap-ass of a band around. More talent comes out of my ass than out of these 5 losers. I wish they would stick it up their YEAH! I especially hate that Fred Durst asshole. Who the hell does he think he is? He thinks he is so cool. He’s a gangster wanna-be, freakin’ poseur piece of shit!

Papa Roach
What kind of pathetic garbage is this? I’m getting sick of all these self-pitying bands. And people are stupid enough to buy this kind of shit. I wish they would “cut their life into pieces!”

P.O.D.
I hate that rap/metal hybrid shit! It freakin’ sucks!! I’m sick of all these piece of shit trendy poseur bands going around and literally ruining metal.

Slipknot
Another one of those among the endless Korn/Deftones rip-off bands. They write lyrics like “F*** the world”. Yeah, that’s real intellectual alright.

This list is dynamic. Since music gets crappier as time goes on, there will always be new shit bands to add. That is, until I get sick of it and stop listening to new music all together (which probably won’t be too long).

To find other shit bands there’s a bunch here at the Bear’s dumb web site.

I’m going to break a tradition this year. Every year since like 89, I wasted 3 hours of my life watching that music awards crap. I’m finally going to do something I should’ve done years ago- don’t even bother to watch that crap. I thought about it and it’s like- Hanson, Spice Girls, LeAnn Rimes- NO, I got much better things to do with my time. So I’m not watching the American Music Awards or the Grammy’s. They are a complete waste of my time and really, who gives a crap about what bands/artists are the most popular, trendy, and talentless. After watching the ones for 96 and seeing Beck, Celine Dion, and Mellon Collie get nominated for album of the year, I realized enough is enough.

Well I did succeed in breaking that tradition. I didn’t watch one minute of that crap. I got a little curious though, and looked in the paper about the AMA. And I got a bunch of laughs. The opening line said “Spice Girls rule the American Music Awards.” It was the most pathetic thing I ever saw. And the “alternative” awards went to Bush. Yeah, “alternative”, what just because they play guitars? And like Bush was the best band. I didn’t watch that Grammy shit either. The first performer was Janet Jackson and her damn dancers and I’m like “I don’t need to see this.” Like I wanna see Hanson-the 90’s version of the New Kids on the Block. There is more to modern music than Paula Cole and Shawn Colvin. I decided I’d rather study for a CS3710 final. And it was good that I did…

The hell is this image service?